We use cookies to provide and improve our services. By using our site, you consent to cookies. Accept Learn more

The UK must keep a “significant level” of social distancing until a vaccine for coronavirus is found, a scientist advising the government has said.

Prof Neil Ferguson told the BBC there was “little leeway” to relax measures without “something… in their place” – such as testing and contact tracing.

A three-week extension to the lockdown is expected to be announced later.

Labour said it would support an extension, but called for details on how and when the lockdown will end.

Prime Minister Boris Johnson introduced strict curbs on life in the UK on 23 March, as the government sought to limit the spread of the virus.

Ministers are required by law to assess whether the rules are working, based on expert advice, every three weeks.

The government – led by Foreign Secretary Dominic Raab as Mr Johnson continues to recover from the virus – will detail the outcome of the first assessment at the daily news conference later.

Figures for Wales, as well as UK-wide figures, will be released later.

More than nine in 10 people dying with coronavirus have an underlying health condition, analysis by the Office for National Statistics has found.

‘Not back to normal’

Speaking to BBC Radio 4’s Today programme, Prof Ferguson, of Imperial College London, said easing the lockdown after another three weeks would depend on “how quickly case numbers go down”.

He said that required “a single-minded emphasis” in government and the health system on “scaling up testing and putting in place the ability to track down cases in the community and contact trace”.

Contact tracing aims to identify and alert people who have come into contact with a person infected with the virus.

The government has announced plans for a contact-tracing app, but experts say 80% of smartphone owners must sign up for it to halt the outbreak.

The UK now has the capacity to carry out 35,000 tests for coronavirus a day, Downing Street said, although latest figures showed that fewer than half that number were carried out.

The prime minister’s official spokesperson said this was due to a “lack of demand, not a lack of capacity” and the government was expanding eligibility.

On relaxing the current restrictions, Prof Ferguson said: “What we really need is the ability to put something in their place. If we want to open schools, let people get back to work, then we need to keep transmission down in another manner.

BBC health correspondent James Gallagher said if a vaccine were to be found, it was not expected that manufacturers would be able to mass produce it until the second half of 2021.

“Remember, there are four coronaviruses that already circulate in human beings. They cause the common cold, and we don’t have vaccines for any of them,” he said.

Prof Ferguson said he believed the “daily number of infections peaked two weeks ago”, but said it was “too early to relax”.

Asked whether the government is moving towards having a lockdown exit strategy in place, Prof Ferguson said he would like to see “action accelerated” and called for more infrastructure.

“I’m reminded by the fact we had a Department for Brexit for government – that was a major national emergency, as it were – and we’re faced with something which is, at the moment, even larger than Brexit and yet I don’t see quite the same evidence for that level of organisation,” he said.

The health secretary, Matt Hancock, told Today that Prof Ferguson was not seeing such action behind the scenes in government “because he advises government, he’s not in the government”.

He said that ministers would “not be distracted” into confusing its “core” message to stay at home and protect the NHS.

“How we communicate as a government has a direct impact on the amount of cases that we have and therefore the amount of people who die,” Mr Hancock said.

“We talk about what is needed now and when we need to change that we will.”

Earlier, the health secretary told BBC Breakfast he believed the government had been clear “we think it too early to make a change”.

Mr Hancock said he did not want to put the “good effort” of the public to waste by ending the lockdown too early, adding that releasing all measures now would let the virus “run rampant”.

His comments come after the UK’s chief medical adviser, Prof Chris Whitty, warned of a possible “bounce” in the numbers soon, due to delays in reporting deaths over the Easter weekend. 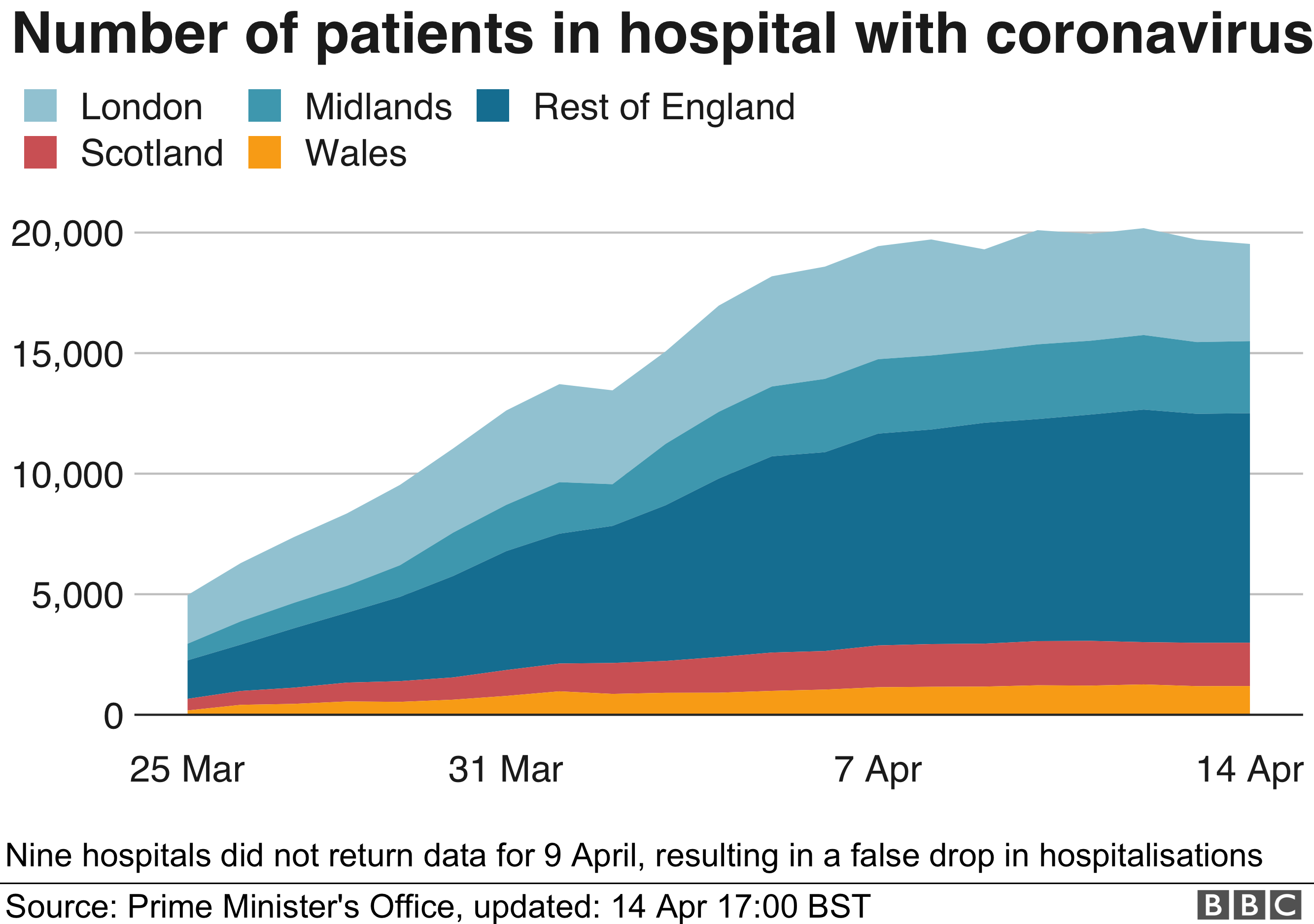 All the indications are that the UK is hitting the peak of coronavirus cases. The number of patients in hospital with coronavirus seems to be levelling out.

There are more than 10,000 beds on general wards available and another 2,000 spaces in intensive care.

It is this headroom that prompted NHS Providers, which represents hospital bosses, to declare this week that it was “increasingly” confident the health service could cope.

But the government’s advisers will no doubt be advising ministers that the lockdown should continue – because they fear any lifting of restrictions at this stage could undo the good work, and see a spike in cases that would gobble up that spare capacity and overwhelm the health service.